Yulli's room generates quite a bit of interest and traffic to this blog. Many of you have asked to see more... ask and you shall receive!! So I thought I would share her room with you today!

I loved decorating this room and am pretty happy with how it has turned out! Yules didn't have much of an opinion in the matter! I'm sure that's going to change over time! Haha!
I had a difficult time deciding on a direction or theme.... as per usual! I pretty much love everything and have commitment issues! One of the things that I learned when decorating a nursery is to actually NOT have a theme! Most people chose a theme like elephants to start with. You can still incorporate elephants into your design but the new approach to nurseries is to design it with a FEEL! How do you want the space to feel? Bright and Cheery? Romantic and Sweet? Eclectic and Funky? Earthy and Organic? Elegant and Traditional? You get the idea! I wanted Yulli's room to feel modern and chic and of course very girly!!

1. I knew I wanted a grey crib! Actually I was borderline obsessive about wanting a grey crib! The only grey crib available here was the Oeuf Sparrow Crib! It's a beautiful and timeless crib that sadly also had a price tag to match!! Boo! 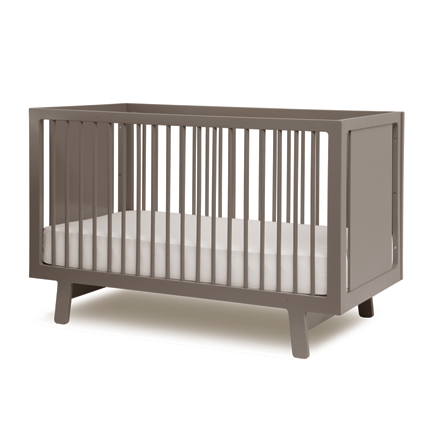 There was seriously slim pickins for modern grey cribs! The only other crib I found was this one. It is the BabyMod Modena and available at Walmart and Target! And it was only $199... SCORE!! 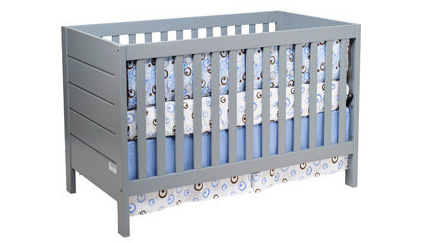 I was giddy like a little school girl when I found this crib... that is until..... I realized they don't ship to here! Of course they don't!! So then I started exploring my options. I researched how much it would cost for someone in the US to buy it and mail it to me! Or maybe get someone travelling there to lug it back on the plane. Or take a little road trip across the border and drag it home! In the end all my options seemed like a big hassle for a crib!
My dreams of a grey crib were slowly drifting away! I even considered buying a cheapy crib from Ikea and painting it grey! But then you gotta get into the whole which paints are safe for baby deal! It was looking like I would either have to scrap the grey crib idea or suck it up and buy the Oeuf one! Boo! Then miraculously, grey cribs became all the rage and everyone wanted one! And POOF one day this crib was suddenly available! Demand and Supply baby! 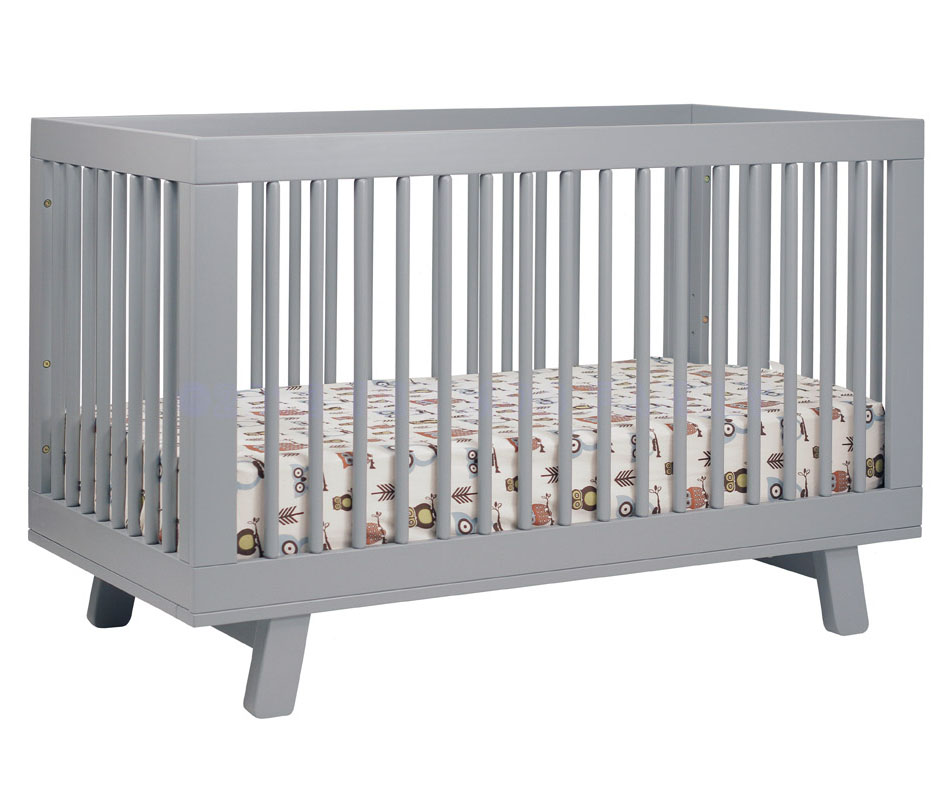 This is the Babyletto Hudson Crib! Kinda looks like the Oeuf one but with a much better price tag!! And I also liked that the grey was a cooler shade of grey!! I was once again super giddy like a fat kid in a candy store!! This is the crib we ended up getting and I am really happy with it! It also comes with a toddler rail! Sweet!
2. When we bought the crib we also ordered a dresser and a glider/ottoman! We decided on a Dutailier glider. They are well known in the glider world and we loved the modern but comfortable feel of them! Pricey but worth it in my opinion! 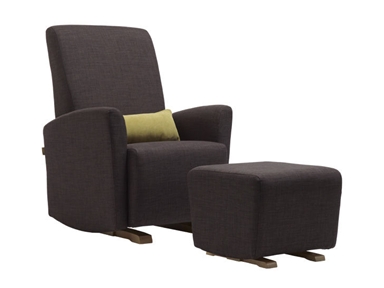 We also purchased a dresser which was kinda an impulse-get-it-all-over-with buy.... but I LOVE it!! It has clean lines that hopefully won't go out of style and is SOLID and will last forever!! Unfortunately I don't think they make the exact one we purchased anymore but there are similar styles! It is from AP Industries. They have gorgeous modern furniture that is seriously built to last!
3. Besides being obsessed with the grey crib, I was also obsessed with having a striped focal wall! You can read all about that ordeal here! I was also obsessed with chevron stripes and wanted to incorporate that into the room too. (WOW I was obsessed with so many elements in this room!) I ordered gorgeous chevron bedding from Babybedding.com. I really liked this website! You can design your own bedding and they have so many options to help you visualize what it will look like. You can choose the color of your crib and even the wall/trim/floor color of your room so you have a better idea of how it will look! They had every crib color under the sun... except for grey!! Haha! So I still had to use my imagination!!

4. You will notice that there are lots of elephants in her room! But do you also notice that they are incorporated into the room but you would never ever really think that it is the theme of the room!! For some reason I had an elephant infatuation while I was preggos! The elephant lamp was actually the very first thing I bought for her nursery! I saw it at Winners while shopping with a girlfriend, but didn't buy it because there was a tiny little chip on one of the ears. I came home and still thought about it and was kinda kicking myself for not getting it! You know when you see something at Winners, you get it because chances are it won't be there the next day! I was still obsessing over it and kinda EMO, so I dragged Husband there a couple days later and just my luck it was still there, so I grabbed it quickly!! He was kinda hesitant to buy it because we were in the process of moving and didn't need yet another thing to pack and move. He preferred for us to purchase things after the move, but he also knew not to say no to an EMO pregnant lady! The little chip was a quick fix with a little white nail polish! I almost forgot it was there! The little silver elephant piggy bank is also from Winners. (Do you still call it a piggy bank since it's an elephant? Or do you call it an elephank? Hmmm...I don't know whatever!) The little pink elephant was from Bouclair on clearance for I think 49cents but it was an ugly color so I just simply painted it pink. And of course there is Mr. Elephant which I picked up from Ikea! He is sooooooooo cute but Husband and most of you guys think he is creepy looking. You can read about that here! Most of the stuffies in her room were gifts except for Mr. Elephant of course and the pink bunny! Not sure if it was the preggo hormones or what, but I had to have that bunny! It was a pretty expensive little bunny... well more than I would like to spend on those type of things! It is a JellyCat bunny from Indigo and I really think it completes the room! I love it so much that I'm not sure if Yules will be allowed to play with it!! Haha!

5. Many of the little accessories in her room are DIY projects; some of which I've blogged about in the past.
-Giraffe word art
-Painted Ceramic Owl
-The letters are from Michaels and were also painted pink! Seriously that tiny 99cent bottle of acrylic paint has gotten some good use in this room!
-The hanging tissue paper pompoms were made by my girlfriends as decorations for my baby shower! They were so cute and matched the room so well that I decided to just hang them up.
-The photo ledges weren't DIY... I thought about it since there are a billion tutorials floating around and it seemed simple... but in the end we just bought them from good ol' Ikea!
-The rug I talked a little about here and here.

If there's anything that I didn't mention and you want to know more about, just ask! Anyways... after all that I'm sure you just wanna see pics of her nursery already!! Well here it is ENJOY! 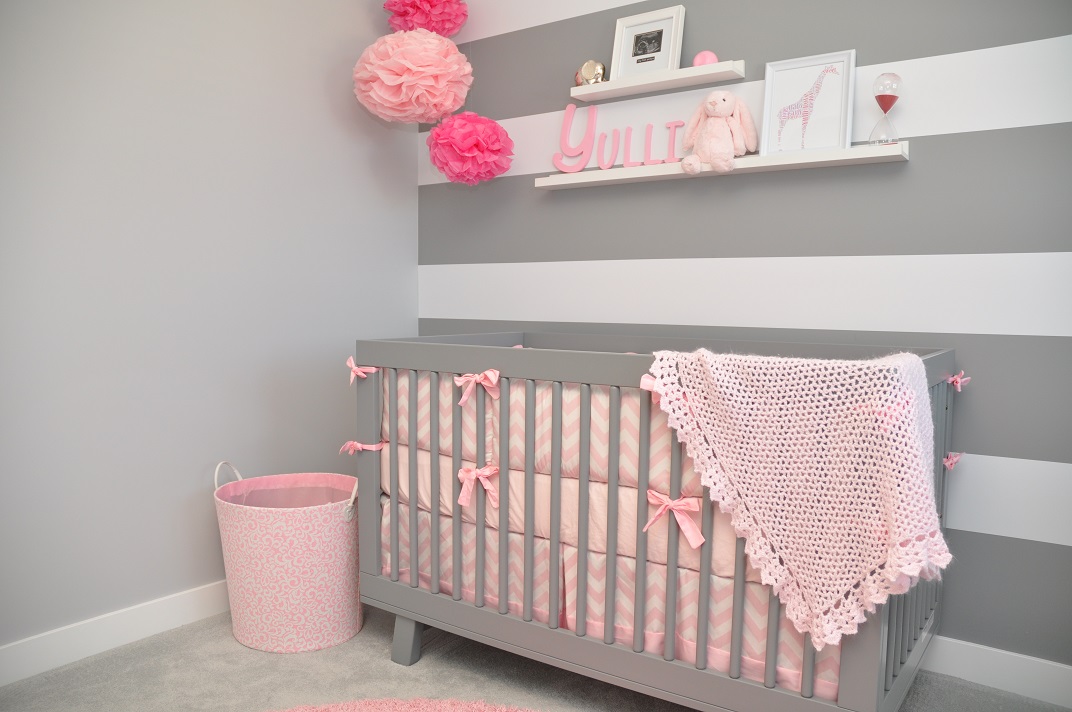 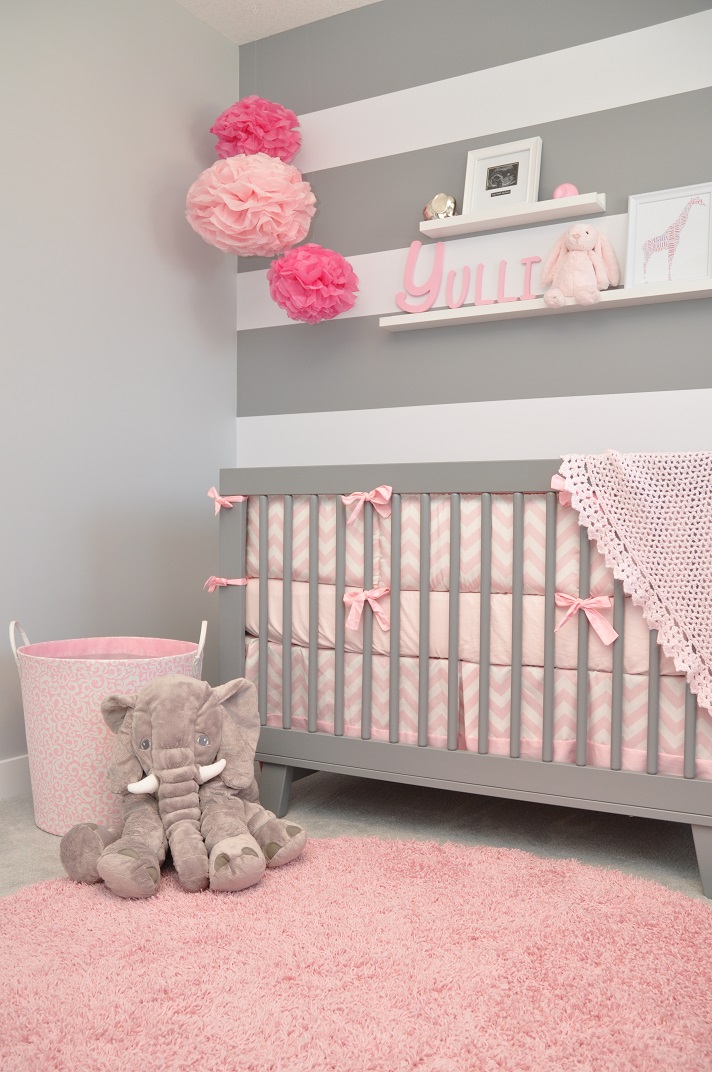 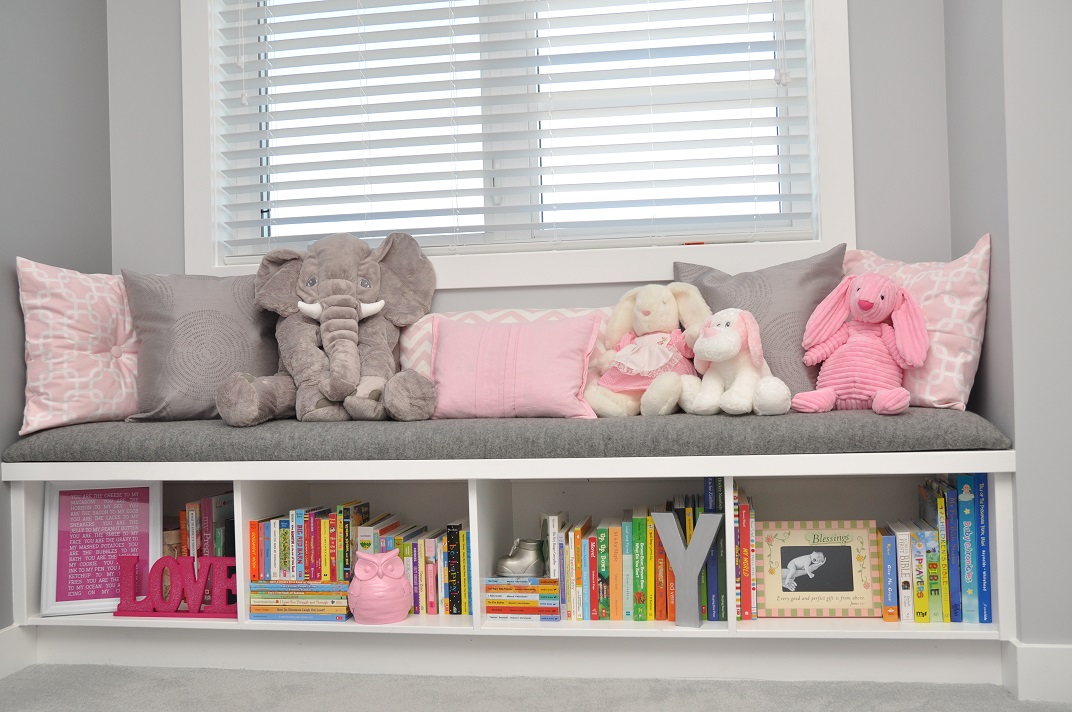 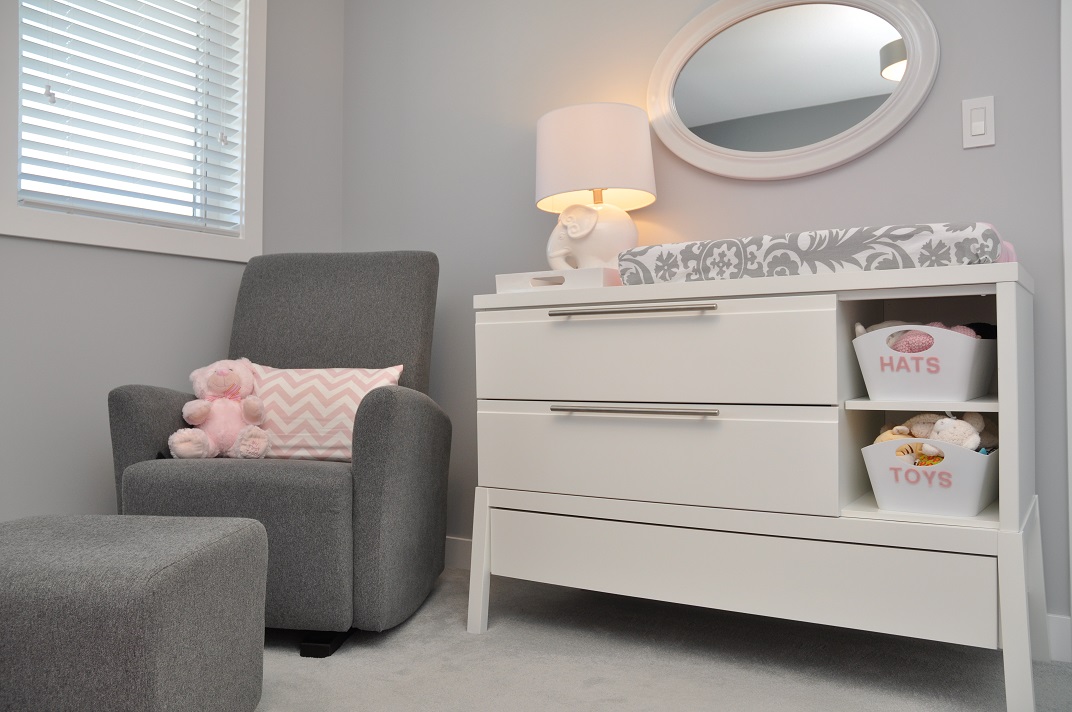 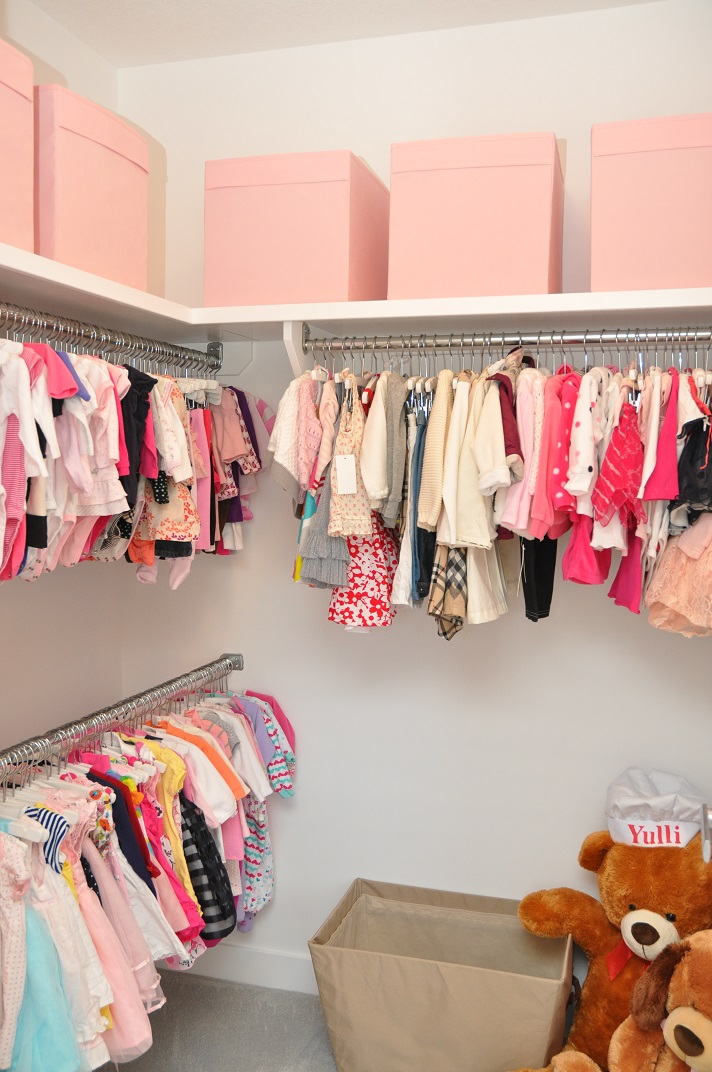 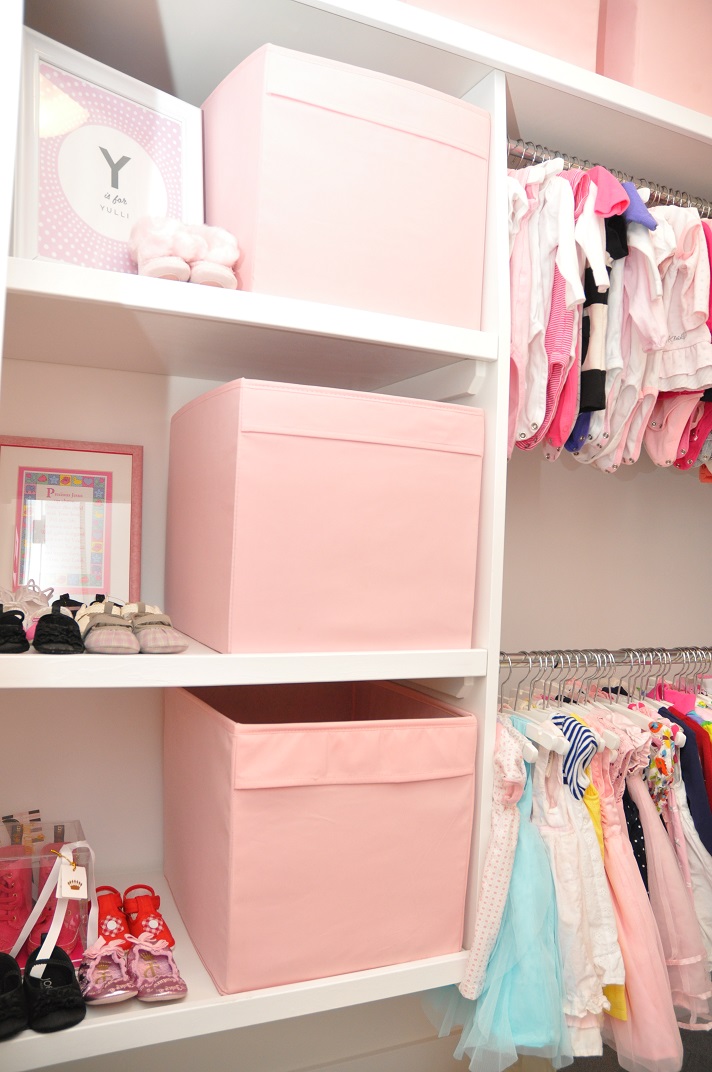 And here's a pic of a bunch of sweet little girl dresses for you guys to oooooo and ahhhhh over!! Melts my heart everytime! LOL 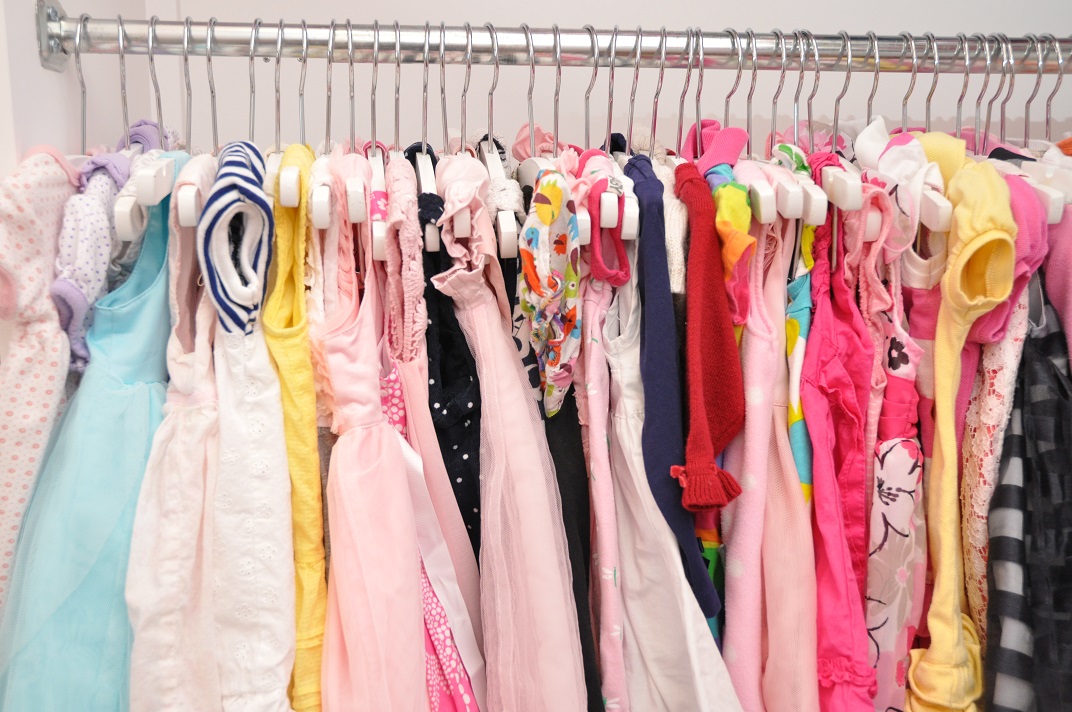 Email ThisBlogThis!Share to TwitterShare to FacebookShare to Pinterest
Labels: Décor-ish

KalbsandYules
Welcome to Kalbs&Yules! Why the weird name you ask? Well to be honest... all the good-easy-to-spell names were already taken! So this blog is named after the two loves of my life: Kalbi my dog and Yulli my kid! Technically I have 3 loves, but Kalbs, Yules and Husband doesn't sound so good! So there you have it... that's where the name comes from! What is this blog about you ask? RANDOMNESS!! Yup, a little of this and a little of that! Random adventures, stories and ideas!! ENJOY!